Free from blemishes, scratches, and user wear. All controls are completely functional. Great This product shows little signs of use and all controls are completely functional. Used Tech 21 Fly Rig 5 SansAmp Effect Processor. Your Price $ 159.99 msrp:,lowPrice:159.99. Open box items, clearance items and any purchase where a manual. Dec 01, 2016  Tech 21 recently released the Bass Fly Rig, and I must say, from reports I am getting from fellow bassists, it is literally flying off the shelves! After getting my hands on one of these, I can definitely see why. The Tech 21 Bass Fly Rig is a no-nonsense must have for every bassist out there. Please specify Fly Rig FX Loop Insert Points when ordering: 1.) Post OMG/Plexi - Loop is on only when OMG/Plexi is on. 2.) Pre-Sansamp - Loop always on, or on with a mini push switch. 3.) Post-Sansamp - Loop is only switched on when Sansamp is on. 4.) Anti Sansamp - Loop is. Compact pedalboard? The perfect ‘B–rig’? This ‘Swiss Army Knife’ of guitar processors is all of those, and more. Tech 21’s Fly Rig 5 is a very compact multi–stage guitar pedal, designed for both DI’ing straight to a PA or recording system, and for use in front of a guitar amp.

Compact pedalboard? DI preamp? The perfect ‘B–rig’? This ‘Swiss Army Knife’ of guitar processors is all of those, and more.

Tech 21’s Fly Rig 5 is a very compact multi–stage guitar pedal, designed for both DI’ing straight to a PA or recording system, and for use in front of a guitar amp. The name derives from it being the kind of rig you can take on a long–distance ‘fly’ gig, where the only thing you’ll get to bring with you is your guitar — this will fit in the pocket of a guitar case or gig bag with room to spare! The Fly Rig 5’s primary signal path is all analogue, offering an individually switchable ‘Hot’ boost, a Marshall Plexi–style distortion, and a SansAmp stage, with a digital spring–reverb emulation and tape echo–style delay running in parallel. This is a nice configuration that results in your tone–shaping elements never leaving the analogue domain, whilst still giving you access to high–quality effects.

Mono guitar in and mono line out jacks appear on the rear face of the enclosure, along with the 12V DC input for the supplied universal PSU. There is no facility for onboard battery operation. Five footswitches activate the four individual processes — boost, distortion, SansAmp and delay — and, as the reverb is tied to the SansAmp module, the fifth switch is available to be used as a tap tempo for the delay. 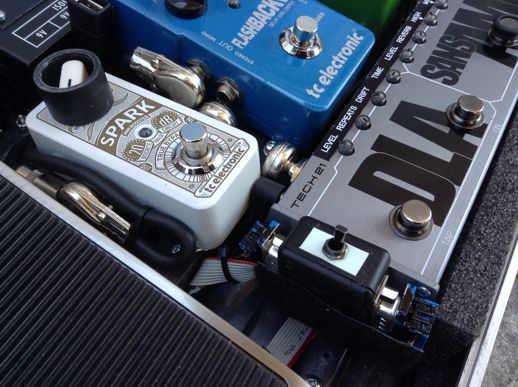 The mini controls are all arrayed across the top and illuminate in a different colour for each stage. They are fine as ‘set–and–forget’ controls, but if you want to adjust them in performance with any degree of certainty, it is well worth using some of the push–on enlargement sleeves that Tech 21 now ship with every unit.

The primary applications are either as an ultra–compact pedalboard going into the front of an amp, or as a ‘complete rig’, feeding a speaker–emulated signal straight to a PA system or full–range/flat–response amplification on stage. In the former mode, you might want to disable the SansAmp stage, which incorporates the speaker emulation, using the amp alone as your primary sound, the Plexi for extra distortion and the Hot boost to push either (or both) a bit harder when needed. Losing the reverb at the same time as the SansAmp is not a big deal, unless you happen to like the sound of reverb in front of an amp. There is a lot of range in the SansAmp controls, however, and I found I could improve the sound of some amps by leaving the SansAmp active, even though I was then, technically, hearing a speaker emulation through a real speaker.

If you are running into a full–range rig or a recording DI, you’ll definitely want the SansAmp stage active to ensure a guitar speaker–like response. The SansAmp’s Drive control has enough range to get you into overdriven Fender amp territory on its own, even with single coils, and you can always hit the front end harder by kicking in the adjustable Hot boost function. The Low, Mid and High controls are post–distortion, so it pays to think of them as final tone–shaping controls like a mixer channel strip, rather than distortion–shaping elements like most guitar preamp tone controls. At higher performance volumes I was consistently backing off the lows and boosting the mids. For recording via a DI, I usually left everything around halfway.

A fixed ‘pre–EQ’ gives the SansAmp stage a Fender–like voicing, but engaging the Plexi stage disables that in favour of the Plexi’s own EQ, and brings the Drive and Tone controls into play. Drive, like all the Fly Rig 5’s controls, has a very wide range, whilst the Tone control operates like the one on the Hot Rod Plexi pedal itself, in that it progressively attenuates HF as you dial it back from maximum. Both Plexi and SansAmp stages have an output level control, allowing you to optimise gain staging through the unit, and whilst the reverb offers only a single level control, the delay module offers Level, Time, Repeats and Drift — the latter applying a gentle random modulation, achieving a nicely worn tape–echo effect. Turning up Drift with the delay set at zero also gives you the option of using the delay as a chorus effect instead.

As a pedal designed for two (at least) significantly different scenarios, there is no one–size–fits–all setup — get the gain staging wrong and it can seem a bit hissy; dial in too much distortion in a live context and it can seem excessively compressed and unable to cut through a band mix for soloing. Running the Fly Rig 5 with all three gain processes on at the same time, but with each one outputting at only just above unity, gave me a setup that was no noisier than a typical tube amp at an equivalent gain/level combination. Single–coils clean up well with the guitar volume control, sliding into a liquid lead tone with great ‘feel’ as you turn up, just like with a good tube amp. While the top end is smooth, the bottom end is deep and loose, especially as you use more Drive from the Plexi. I found I needed to use a pedal in front with some mid boost/bass cut to get controlled, ‘tight’ distortion, just as I would with a real amp.

Overall, I preferred to use the Plexi stage as part of the voicing of my basic tone, rather than as a switchable distortion pedal, but carrying one more pedal to give me switchable distortion on a ‘fly’ gig wouldn’t be a deal–breaker for me. Of course, there are many different ways of using the Fly Rig 5 — you can run the SansAmp completely clean and switch on the Plexi for distortion, or you can just overdrive the SansAmp with the Hot boost — it all works. The delay, with a little wobble dialled in, is a delight, and the reverb just works, becoming an integral part of the sound without being too obvious.

What you make of the Fly Rig 5 will probably depend on what you already have. If you are an AxeFX or Kemper user (and you are not so flush that you bring two of them to every gig), then an FR5 might be a great emergency backup. If you regularly have to use rented backline with no great certainty as to what it will be, then an FR5 offers a consistent element to your tone shaping, with enough versatility to cope with whatever shows up. And if you don’t already have a great DI recording facility, it’s the most complete all–analogue solution there is (yes, I know the effects are digital, but you don’t have to use them, and if you don’t, they are not in the signal path).

Given that the FR5 costs less than an equivalent array of individual pedals and is considerably more compact than anything you could assemble for yourself, the only place it loses out to similar DIY solutions that many players already have is in not including a tuner. Tech 21’s Fly Rig 5 may have been conceived as the ultimate ‘B–rig’, but the proof is in the playing, and this diminutive box is actually capable of producing some ‘A–rig’-quality results.

If you are happy to go digital, you’d be looking at Zoom, lower-end Line 6, Behringer and so on. Or, you could get a Tech 21 Blonde and a Hot Rod Plexi and a Boost and a Delay and a Reverb and a power supply and a pedalboard... but it would be five times as big and cost you three times as much.

Great sound, great feel. Convincing DI guitar processors that allow you to stay in the analogue domain are few and far between. Compact and highly affordable ones, even more so.